ART OF THE MUSES

There is obviously a dictionary definition for the word. However in my opinion, just like love, music is hard to define, as it means many different things to every individual. If you Google it, you’ll find many wonderful descriptions about music written by different people. If I were to write here all of the descriptions I liked, I would run out of space on this page!

If we look at the etymology of the word, Wikipedia says that “in Greek mythology, the nine muses were the inspiration for many creative endeavors, including the arts. And the word music derives from Greek. Mousike: art of the Muses.”

Thomas Carlyle (a Scottish philosopher, historian and writer who lived between the years of 1795 and 1881) described music as the speech of angels. To be exact, he wrote: “Music is well said to be the speech of angels; in fact, nothing among the utterances allowed to man is felt to be so divine. It brings us near to the infinite.”

Actually, I am not a believer. I have no religious views, and I don’t really believe in angels. But still, I like thinking that there is something divine and magical about music. That’s why I like Carlyle’s description and chose “speech of angels” as the name for my blog.

But when and how was the first music created? Well the nature has its own music. The wind, the trees, the waves, they all have their own music. It was there from the beginning. If we think in terms of man-made music, it is not hard to guess that it also goes back to the beginning, the beginning of humanity. Human voice was probably the first instrument. I imagine chanting people. I imagine Tarzan-like scenes where people are pounding their chests or beating their legs or even clapping maybe. I imagine stones and sticks being used to make repetitive sounds. I think of cavemen. And then I go further and I think of Native Americans, Australian Aborigines and African tribes.

Unfortunately, we can know very little about prehistoric music. (Prehistoric refers to the era before the invention of writing systems which was around 3400 BC) What we know is the flutes made of bone or ivory found by archaeologists. Here is a video about the oldest flutes found in Germany:

We know more about ancient music (ancient referring to the era between 3400 BC and 500 AD) due to ancient drawings and writings. For example, the oldest known melody, the Hurrian Hymn, was written on clay tablets around 1400 BC in the city of Ugarit in today’s Syria. It’s an ode to a goddess. Here is how the melody goes:

Then there is the Seikilos epitaph, the oldest complete musical composition. The notations and lyrics were engraved on a marble column in 100 AD in Tralles which is a Hellenistic town in today’s Turkey. Here are the lyrics and the melody:

While you live, shine

Have no grief at all

Life exists only for a short while

And time demands an end

After the ancient period, comes the medieval period. Well, we can find endless examples of medieval time music. So I won’t go into that today. And this post started to sound like a history lesson! (in which I am not very good at ?)

The point is that, music has always been an integral part of human life. I know it is essential for me anyway.

So thank you for music, Greek Muses! 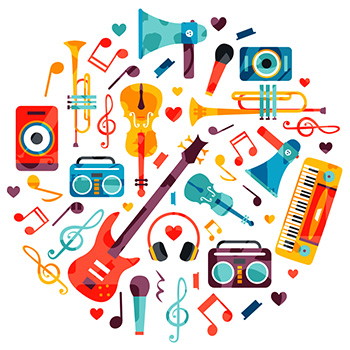 "Music is well said to be the speech of angels; in fact, nothing among the utterances allowed to man is felt to be so divine." - Thomas Carlyle

Signup for my newsletter